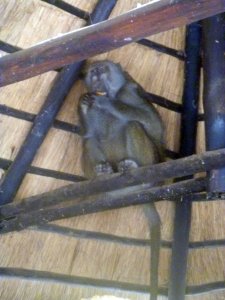 Nice to be reminded of the dangers of Africa’s animals. This is one run-in with a baboon that I’ll never forget. And the greatest warning I’ve ever received when it comes to elephants. Read more on The Good Men Project.

When I began to realise the influence of Africa’s former colonisers and began to structure my philosophy to what it is today – that we are all nothing more than hu-man. Read more on The Good Men Project 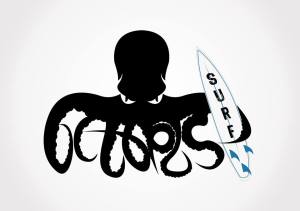 “Come any time, grab a board and hit the waves,” Edy offered.

I couldn’t believe it. At the time, I was teaching surfing at place that took advantage  of my volunteering bartering ways, so I quit and found Edy, then based at Pink Orange but now based at Sea Bird Beach Cafe in Morjim, North Goa.

I know what you’re thinking: India and surfing? This pizza-sliced shaped nation is surrounded by water so yes, India and surfing. On the east coast you have the Bay of Bengal which produces some gnarly waves as Appu, India’s surf champ (placed first in 2016 and third in 2017) and owner\operator of Ocean Delight Surf School in Kovalam, described the right-handers to be, “Big, man. Some days we get 6-foot, some days it can be 10, up near Madras.”

On the other side of the sub-continent, you have the Arabian Sea where during monsoons it is impossible to even approach the water let alone think about going in. The undertow would suck you in like a crocodile taking a zebra and spit you out somewhere along Somalia’s coast in a flash. 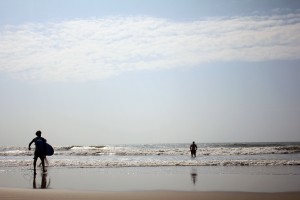 But during the season, which tends to kick off around September and last through until June-July, the waves are perfect for beginners. Easy going, chunky and rarely exceed the 2-foot marker.

Except when a cyclone hits as it did this year and produced some 10-footers with fast-paced barrels as Swapnil, Edy’s teaching partner experienced.

Which is why Goa and Edy’s surf school – Octopus Surf – is the best place to learn how to tame the most powerful element on our planet – water.

“I love octopus,” Edy explained the origins of the name. “Fascinating creatures.” 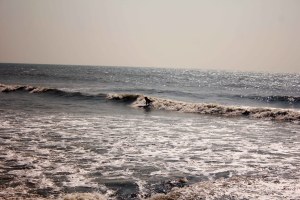 Goa’s abundant beach breaks make it a safe spot to learn with nothing but sand to brace your wipeouts. It’s shallow for up to about a hundred meters out and the waves start breaking just 30 meters from the beach itself.

“I’ve been surfing for about six years,” Edy explained. “I love it.”

As do I. I don’t regard it a sport. Rather a connection to the water. It’s therapeutic and meditative, cleansing my being of everything and spitting me back out on the beach with a new, clean slate. I like to think that it’s not me riding the wave, rather the wave allowing me to ride it (until it’s had enough and kicks me off).

Surfing is one of those activities where you either love it or you hate it. There’s no middle ground. And I love it. I taught myself how to conquer Neptune’s anger at a late stage in life, when I was 29.

No one told me I should have started on the white-wash. Instead, I paddled straight out for Lorne’s 3-4 foot powerful breaks that taught me a lesson or three. And although I’m no world class surfer, I’m a world class wipe-outer. 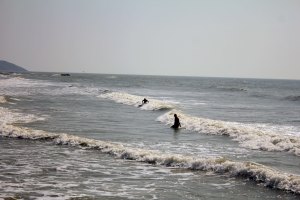 The best time to surf in Goa is from early morning until about lunchtime when the offshore winds change to an onshore, crumbling the waves.

On occasion, if I was early enough, I’d find myself sharing the water with dolphins, watch the Brahmani and Brown Kites head out to sea to fish or a flock of sandpipers flashing from brown to their white underbelly as they follow the local fishing boats dotting the horizon.

Fishermen on the beach would scrub their beached boats, cleaning out their nets while dogs and crows hovered about for scraps. Every now and again a fish or a few of them might leap out.

The waters of the Arabian Sea are usually quite clear and warm with a lot of glassy days. Your main traffic concern would be the tourists who seem to be so fascinated by surfers that they remain where they are in the water as you and the board you’re riding head straight for their grinning faces.

And it’s always good to be able to surf without a wetsuit.

Edy and Swapnil are both locals who know the waters quite well (as does Appu in Kovalam) and are connected to the other surf schools down the coast.

The prices at Octopus Surf School are local (other schools target the tourists and charge disproportionately) and their teachings, from what I’ve seen, are easy to follow.

No matter what level you’re at when it comes to water sports, I’ve yet to meet a student of Octopus Surf that hasn’t managed to get up on a wave or leave without a smile. The boys also run surf camps for kids combining yoga and acro-yoga which go hand-in-hand with surfing.

And you’ll never see either surfers without a smile on their face. How can you not smile when your life is a beach?

If you’re ever in Goa, check ’em out on Facebook or via the website or just head to Sea Bird Resort in Morjim and ask for Edy or Swapnil.

If you end up in Kovalam, Tamil Nadu, head for Appu’s school, Ocean Delight.